We capped off a stellar year of College sport with an equally phenomenal awards night on 30 October to recognise our dedicated young athletes and coaches. This night was made extra special with the presence of an esteemed guest – swimming legend and Olympic gold medallist, Mrs Libby Trickett OAM – who congratulated our students alongside families and staff. We recognised the sporting excellence, sportsmanship, and collaborative efforts of our students, with both individual and team awards conferred.

The College Sporting Spirit Award commends the positive contribution our recipients have made to College sport through their participation, their promotion of sport culture, and their proud representation of Calamvale at sporting carnivals and interschool events. We extend our congratulations to Nate, Erica, and Olivia for dedicating their time and effort to raising the profile of College Sport. 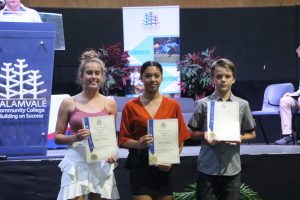 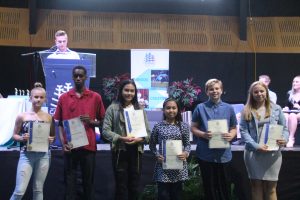 s those students who have cultivated success through sport and demonstrated a high level of sporting achievement this year. Congratulations to our recipients: Daisha, Shareef and Jordie. Congratulations also to Kaylee, Riley and Ruby for their significant involvement in the program, recognised through the ADP Contribution Award. 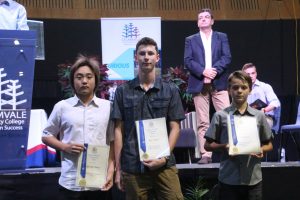 Since its introduction in 2010, our cheerleading program has grown in both strength and competitiveness every year. Our teams have constantly focused on improving their skills and teamwork. We congratulate our Cubs All-Star, Leilani, and the recipient of the Cubs Spirit Award, Ellie. Well done also to Kayla, our Cheetahs All-Star for 2018, and ou 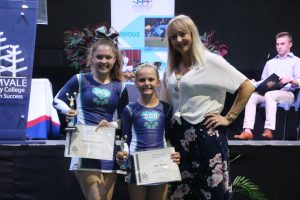 Congratulations to our most esteemed Cheerleaders of the Year – Lily and Charlotte – for their commitment to their respective teams, their excellent technical skills, and their sustained improvement and engagement.

Testament to the formidability and proficiency of our young athletes, we congratulate 33 Best and Fairest Interschool Sport Award recipients for their personal achievements in interschool competitions; 43 Southern Scorpions District Representatives who were chosen to represent the district at regional carnivals, and 13 Metropolitan West Region Representatives who did Calamvale proud in State Championships.

Of course, when you bring together dedicated and skilled young athletes who share a common drive for sporting success, you produce formidable teams that stamp their authority against interschool opponents. As such, we congratulate our 15 District Team Sport Champions in Touch Football, Softball, Basketball, Netball, Rugby League, and Cricket, as well as our highly accomplished Metro Champions, the Year 9 Boys Basketball team.

This year’s Team of the Year is the School Cup Volleyball team, comprised of 10 talented and dedicated young men who were crowned Queensland Schools Cup Volleyball Champions in the College’s first entry into this highly competitive and prestigious tournament. 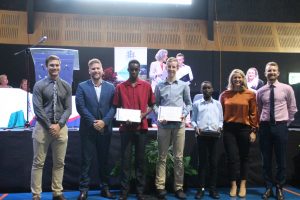 Our most prestigious award, the Sportsperson of the Year, is conferred to three outstanding athletes from each sub school, recognised for having achieved the most success across their sporting endeavours in 2018. We extend our warmest congratulations to our MVPs Fred, Shareef, and Drew for their incredible athletic abilities, exceptional training standards, and commendable sportsmanship. These three athletes have been exemplary role models for their peers and have represented Calamvale tremendously throughout 2018.

A special thank you goes to our esteemed guest, Libby Trickett OAM, who congratulated many of our recipients personally and presented them with their awards. Libby also joined us for a Q&A segment, “On the Couch with Libby”, which proved very insightful and instructive for our budding athletes and Olympians in the making. Thank you to our wonderful coaches who dedicated their time and efforts to nurturing talent, developing technical competencies, and facilitating student success throughout the College.

2018 has been a fantastic year of sporting success and improvement – we look forward to a bigger and better 2019.