2020 was a year that saw both the Hospitality & Tourism Industries go on hold and for the first time ever, many businesses closed their doors. It was an uncertain time for everyone and both industries evolved quickly in order so they could re-open. Nothing is the same, but through it all the industries have started to grow again. The inaugural Queensland Tourism Industry Council’s Salute to Excellence also had to move with the times. Up until this year, nominees had to write a 3000 word application and then had to attend a Skills Day where they were put to the test in their chosen category, up against their peers. This year was different. The nomination process started being the same however; it then changed overnight into a purely online format. 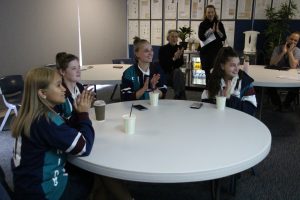 Calamvale had four Year 12 students take on the challenge to enter this year, two for Cookery and two for Food & Beverage. These four girls all had to film their skills test and then edit it down to just five-minute clips, which was not an easy task. The Cookery entrants had to prepare and present a two course meal whilst the Food & Beverage entrants had to set a restaurant for a three course meal which they then had to serve, including wine service. The next step involved them participating in, group challenges with peers from all over the state, and interviews with personnel in 5 star establishments – all via zoom. It was a real challenge this year, as it also tested their technological skills.

Through it, all they stood by each other and supported one another, which was fantastic as ultimately they were competing up against each other. The girls even opted to participate in the online day at school during the June-July holidays so they could be there for each other. We could not have been more proud of these girls and their perseverance to become finalist in this year’s QTIC Salute to Excellence. 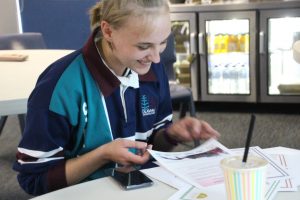 The Awards Ceremony like so many others this year was also online. The four finalists, their teachers/trainers and members of the school administration team all came together to celebrate their accomplishments over afternoon tea in the room their journeys began in just three years ago, their Hospitality classroom. We were so proud to see all of the students acknowledged as finalists and received work experience with The Star Hotel Group: Hannah Getawan & Ella-Louise Merrigan for Food & Beverage along with Julia Alon & Makayla James for Cookery. We were left speechless however when Ella was also announced as the State Winner for Food & Beverage being awarded a scholarship to complete a Diploma in Hospitality Management with TAFE Queensland next year.

The Hospitality team are extremely proud of all the girls and their accomplishments; they all have futures ahead of them in the Hospitality industry and now is the perfect time to enter it, as new doors are beginning to open every day.