I’m a powerlifter. Powerlifting is a performance-based sport, so we get tested on our strength, and compete to see who can move the most weight. As with all strength sports, powerlifting is heavily male dominated, and we’ve only seen it rise in popularity among women in the last few years. This is because traditionally, men are taught to make themselves larger, and women are taught to make themselves smaller, and to take up less space. This is not only metaphorical, but also physical. Everywhere we look, the fitness industry is pushing products and plans to make women skinny. They use the buzzword ‘toned’ frequently. ‘Toned’ has become somewhat of a societal rule for women. Women are expected to ride that very thin line where we’re not too skinny, but definitely not too big. Toned refers to small muscles. Not too large because that’s masculine, and of course to have a low body fat percentage. Every one of these diet and exercise plans promotes appearance and aesthetics over performance and health. A prime example are Skinny Teas, which have been proven to simply be a laxative in tea form. Skinny teas will make you weigh less on the scales, and at most flatten your stomach for the time you drink them. They do absolutely nothing for your health or fitness. 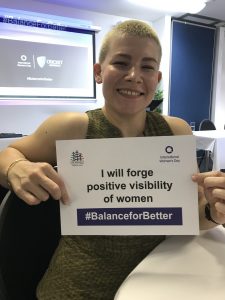 Women have been taught for centuries that the most important thing we can be is attractive, which today means toned. In the 90s it meant skinny. After World War II, it meant fuller figured, or “curvy”. We’ve been on diets in order to appear desirable for generations on generations.

I don’t have a stereotypically feminine body. It’s not on trend either. I’m too big to be toned. Too muscular to be curvy. I have a well developed upper body, which is a big no-no for women. Societal standards tell us upper body muscles are for men to develop, and if women must build muscle, it should only be on the lower body. But my body is strong. I built it with hours in the gym and literal tonnes of food. I feel empowered and independent when I can lift things unassisted, both in the gym and carrying groceries in from the car. I no longer value my body as an objectified entity. It belongs to me, not to society.

Unfortunately, with the increase in women who strength train, strong stereotypes still persist, even among the athletes themselves. Being in the community myself, I always see female athletes claiming that even though they lift heavy, they still ‘look like a woman’. I’m going to break down two issues I have with this statement. 1. What is looking like a woman? If you identify as a woman, however you look is like a woman. There’s not clause in the definition of “woman” that refers to what one looks like. No hair length, breast size, or body shape defines a person as looking like a woman. Diets, hair cuts, weight changes, and clothing choice does not and will never make someone more or less of a woman. The second issue is that this statement is somewhat of an attack on women who have developed a lot of muscle. Saying they are less than. Discounting the effort they put into their bodies. It’s very hard to gain muscle, and it’s generally even harder for women. Genetics also plays a large part in one’s ability to gain muscle, so you could have two women side by side who have trained for equally as long and equally as hard, but have a very different amount of muscle. Comparing ourselves to other people isn’t and has never been the way to get ahead. You will always gain more by lifting others up, rather than tearing them down. 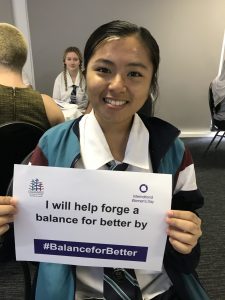 Reports on female athletes in the media are a prime example of how differently men and women are still treated. When the Olympics rolls around, we will rarely see any media coverage on the women’s beach volleyball doubles, for example. Instead, the media focus on their uniforms. For years, coverage of Serena Williams was dominated by talk about her body. She was too muscular, too masculine, or too dark skinned. Stories upon stories were published about her outfits, which were too colourful. The way she celebrates winning a game was too over the top. She is a woman with a big personality, and society didn’t like it. Despite being one of the greatest tennis players, and all around athletes of our time, she was reduced to somewhat of a spectacle.

On the other hand, the Russian tennis player Anna Kournikova, who never won a singles championship game, was voted one of the World’s Most Famous Athletes. She has been labelled as “the hot tennis player”. She’s stereotypically attractive, and therefore gets media attention. There was not a game she played where the commentators didn’t comment on her appearance. She retired years ago due to injury, yet is still in the media frequently. Most recently, for the birth of her twins.

The focus on female athletes bodies, attractiveness, is somewhat of a disclaimer. It’s telling the world that their athletic performance, their speed, power, and strength isn’t enough. Attractive female athletes will always get the more ‘positive’ attention, yet very rarely is it for their performance.

We are entering into a body revolution. Times are changing. More and more women are training to get strong and fast. Fit and healthy. Making goals that aren’t based on dress sizes or weight on the scales. Body weight is meaningless in our day to day lives. We should never dictate our lives and happiness by a number on the scale or the size of our clothes

I want to see the world change into a place where women are valued for more than our appearance. I want to see a world where the media report on female athletes without talking about their bodies or outfits, or love lives. I want to see women valued for what they bring to the world.

The past couple of years have seen lots of people pushing back against feminism on the grounds that it is no longer necessary, but I believe everything I’ve just spoken to says otherwise. The argument is that women have the vote, and are allowed to study and work in whichever field we choose. In these regards, yes, we have reached equality – in the Western world anyway. However, to quote Beyonce, gender equality refers to the social, political and economical equality of the sexes. 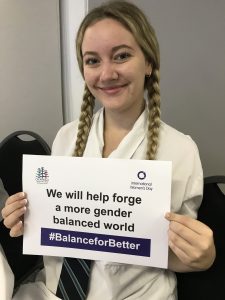 Socially, we still have a ways to go. Men and women are still held to very different standards in society. In Australia, it’s safe to say most of our gender equality problems are societal. Politically, we do not see an equal representation of women in parliament, which is currently made up of 32% women. Our society’s poor treatment of our first Prime Minister, Julia Gillard, showed us that devastatingly, our public cannot handle a woman in a position of power.

And, as we know pay parity is 217 years away, so we have not reached economic equality.

Why is gender still on the agenda? Because we haven’t achieved equality. The gender pay gap still exists. It is still deemed odd for men to be stay at home dads. Women are still attacked and abused on the street and in their homes. Claims of harassment by men are still ignored. We live in a country where men with emotions are deemed weak. Women are expected to cry, and men aren’t allowed to. The toxic gender stereotypes in our society, especially in Australia, are damaging all of us.

We teach women that being a mother is the only thing to aspire to. We shame career women who go to work and leave their kids at home. We belittle men who take time off work to care for their children. These things should be a personal choice, not one based on society’s rules. Every woman is capable of having a career, and every man is capable of being a stay at home dad. Women shouldn’t be shamed for taking the less popular route. We can raise children, or work, or look after the home, or all three.

How do we achieve this progressive change? Until a few years ago, I was resigned to the fact that we can’t. I just thought that this was the world, and I had to get over it. I thought that the world was too big and I was too small. But then I realised that if everyone thought this way, nothing would ever change or improve. If the suffragettes decided they couldn’t be bothered, we wouldn’t have the vote. No women would be here today, to learn or to teach. I wouldn’t be allowed to speak to a group or pick my own outfit, or shave my head. If nothing ever changed, we wouldn’t have TV or Netflix or lamps. Slavery would still be the norm, and kings would behead their wives when they got bored of them. The worst thing we can do for our cause is be complacent. So don’t laugh at a joke you think is sexist, or spread rumours about women. Be an ally for our cause. International Women’s Day isn’t only for women. It’s for all of us. To celebrate how far we have come and to fight for progress in the future.