CCC Takes on the World at Yale University 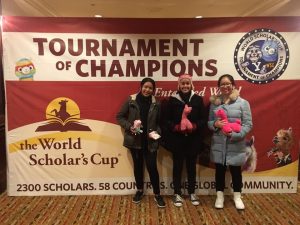 The CCC World Scholar’s Team have continued their academic success at the recent Tournament of Champions at Yale University, USA, coming home with numerous gold and silver medals.

From November 16-20, the team of 3 students competed in a series of challenging academic events against over 400 teams from 58 countries. The Tournament of Champions is the pinnacle event of the World Scholar’s Cup, with students having to qualify for the competition through the Regional and Global Round events. The best of the best teams from across the world then compete in 4 intense days of academic competition, in events such as the Team Debate, Scholar’s Bowl, Collaborative Writing and the Scholar’s Challenge.

The CCC Team won a gold medal for their team performance in Collaborative Writing, placing 16th overall, the second-highest performing Australian school in this category. In the individual award for Writing, Sally Hoang also gained a gold medal, achieving 25th place overall from a field of over 1200 stude

nts. The other team members, Tavpreet Kaur and Sofia Juria, were also awarded a silver and a gold medal respectively for individual performance in writing. Sofia added to this, winning as additional 3 gold medal for the Challenge Areas, making an impressive 5 gold medals total. The team placed 97th overall, a credible achievement for their first foray into this competition.

Preparation for the Tournament of Champions is intense, and the CCC team has been preparing through study and training since February. To compete in the World Scholar’s Cup, students must study 6 curriculum areas based around a theme, An Entangled World. The subjects include the Science of Memory, the History of Diplomacy, Black Markets and Literature, Art and Music. The events require students to utilise their deep knowledge of the subjects in inter-disciplinary challenges.

The competition took place at historic Yale University, giving students a taste of life at this prestigious campus. Stirling Chemistry Laboratory, the Shubert Theatre and Berley Hall were all venues for events, and the experience culminated in the Closing Ceremony in Woolsley Hall. 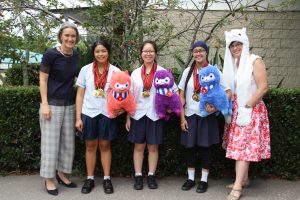 “Our students have achieved amazing results, not only at the Tournament of Champions, but throughout all rounds of the competition,” said team coach, Ruth Smith. “This competition is invaluable in helping our high achieving students to develop deep knowledge in a range of internationally relevant subjects, and utilise them in events which also demand a high level of rapid critical and creative thinking by connecting and utilising knowledge. I’m incredibly proud of their achievements.”

“It was a wonderful experience.  New York was amazing and the competition was really fun, a bit nerve-racking but very exciting.” (Sofia Juria)

“I loved the writing, it just comes naturally, so I wasn’t scared about this part of the competition.”

“I was really nervous to begin with, but as soon as we began our team just worked really well.” (Tavpreet Kaur) 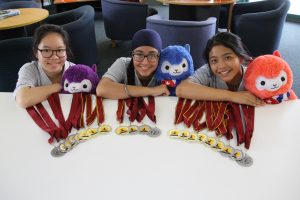 World Scholar’s Cup not only gave the CCC Team the opportunity to compete against the best teams from across the world, but also to meet students from other countries and develop lasting international friendships. This aspects of the competition reflects the focus on international mindedness at Calamvale Community College’s International Baccalaureate programs and we look forward to continuing our involvement in this competition in years to come.

“I am so proud of our students.  They showed courage entering such a large competition and they really had to stretch out of their comfort zones.  They took that challenged and really made us and their parents proud.  Congratulations girls and go Calamvale!”  Ms Starmer, Executive Principal.