In August, the College graciously welcomed the Taipei Youth Folk Sports Group for an enchanting performance that demonstrated to our Year 3 students the beauty of cultural exchange, inheritance, and expression.

This youth troupe – established as a Taiwanese government initiative in 1987 – consists of 30 students aged between 11 and 14 from schools across Taipei City. These young performers have trained for two years in order to represent the richness of Taiwanese culture with their specialised skills, physical agility and creative flair. 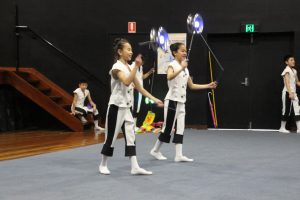 Although Taipei Youth Folk Sports Group tours five continents across the globe, our students were incredibly fortunate because Calamvale was the only school chosen to host a performance in Queensland. The College maintains productive relationships with the sponsoring organisations, the Taipei Economic and Cultural Office of Brisbane and the Hakka Association of Queensland.

Held at CPAC, this year’s folk art performance was characterised by a contemporary sporting flavour. The troupe showcased the performative elements of gymnastics, badminton, and soccer alongside storytelling and modern dance. For example, diabolo spinning featured within a beautifully orchestrated dance; the audience was left in awe as the performers manipulated multiple diabolos simultaneously with amazing changes in speed, direction and movement. The performers also took rope skipping to a new level by weaving a touching story with whirs, waves, and loops. A shuttlecock kicking display also demonstrated the stylistic precision and graceful agility of the young performers. The group also encouraged its young audience with a motivational dance performance about persevering against adversity and building resilience across all sporting endeavours.

The Taipei Youth Folk Sports Group also exposed our students to some of the festive and artistic practices that underpin Taiwanese culture. For example, the Group performed a harvest dance with bamboo sticks, traditionally performed by the aboriginal Taiwanese Amis Tribe in anticipation of an abundant harvesting season. The performers also illustrated cultural significance of the Dragon Boat Festival – one of the largest celebrations in Taiwan – by wearing scented sachets, enacting dragon boat races, and eating sticky rice dumplings. These cultural performance were complemented by traditional folk music and vibrant clothing.

Throughout this performance, our students learnt about the value of preserving our diverse cultures, participating wholeheartedly in sports, and refining our unique talents.